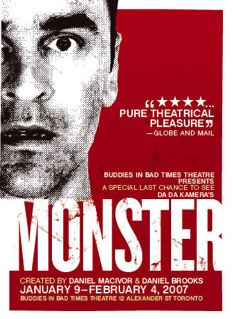 MacIvor’s complex and bravura performance combines with direction by Daniel Brooks, Richard Feren’s score and most particularly stunning lighting by Brooks and Andy Moro to create a performance that is certainly spine-chilling, in the best sense of the word.

Monster, seductively lighted by Andy Moro and Daniel Brooks (listed as Mr. MacIvor’s co-creator), is spookily in sync at times with such interpreters of the outer limits as David Lynch.

While MacIvor may be alone on stage, it is obvious from the very top of the show that what we are seeing is the product of a community of highly skilled associates and artists. Without the fluid and unobtrusive direction of Daniel Brooks, or the often evocative music of Richard Feren or the lighting genius of Andy Moro, Monster certainly would be a mere shadow of the show it is.